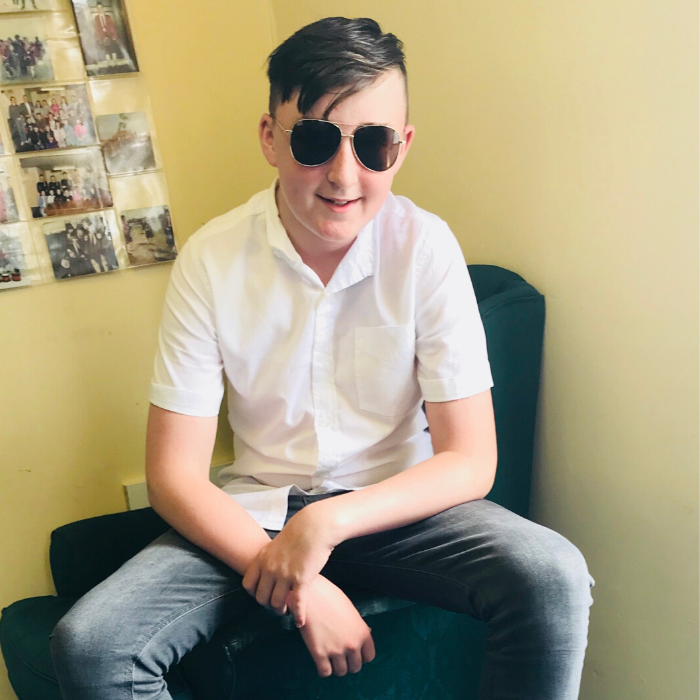 Aaron Forde is 13 years old and is a bass player, vocalist and songwriter in the Ballyphehane Youth Project, a rock/pop music programme set up in partnership with Music Generation Cork City and Foróige. Aaron goes to school in Coláiste Chríost Rí.

Since I have a lowish voice, the bass kinda complements my voice. In a way, it’s slightly easier than guitar. Then in other ways, it’s harder. It has a nice sound to it and I enjoy playing it. A lot of the time, we’ll simplify the riff on the bass, so that I can sing, but it’ll still sound good. I worked my way around to the bass, after starting on guitar.

I like to play all styles of music, anything really, whatever comes up. My favourite, personally, would be rock. I get a serious rush of excitement out of playing music because when you’re up on the stage in front of a load of people, you basically have to not think and just do it! When it comes to nerves, my advice is ‘don’t think’. The only thing I’ll think of is what I need to say. I go up, I clear my mind and just go for it.

I recently took part in the MayHUM Feelgood Friday concert in the Kino. I was seriously nervous beforehand. Our main song for the performance was “Stressed Out”- it took about two months of rehearsing to get it right. On the day, I thought I was going to die with the nerves! But when I got on stage, my family was there and a couple of friends, which put a smile on my face, so I just went for it. My younger sister loves to play my bass riffs on her little Minion guitar, which is so funny. She got a kick outa seeing me up there!

I was the first person in the Ballyphehane Music Project. Before that I wasn’t playing music,but was very interested in music. Our tutors, Aaron and Freddie are really good teachers and we’re all really close here. Craig, our drummer has been my best friend for a good while. Then I made friends with Adam through the project.

Thanks to the music project I’ve learned how to be more confident. I don’t see myself ever giving up music. It’s a great thing to get in to and a good way to find distraction and help you deal with things. Last year, my father passed away and music has helped me cope with the loss. If I didn’t have music for the last year, I don’t know how I would’ve coped.

At the end of July, I’ll be performing as part of the YUM Festival in Fitzgerald’s Park. We’ve prepared a brand new track for it, which I’m really looking forward to performing for the first time!