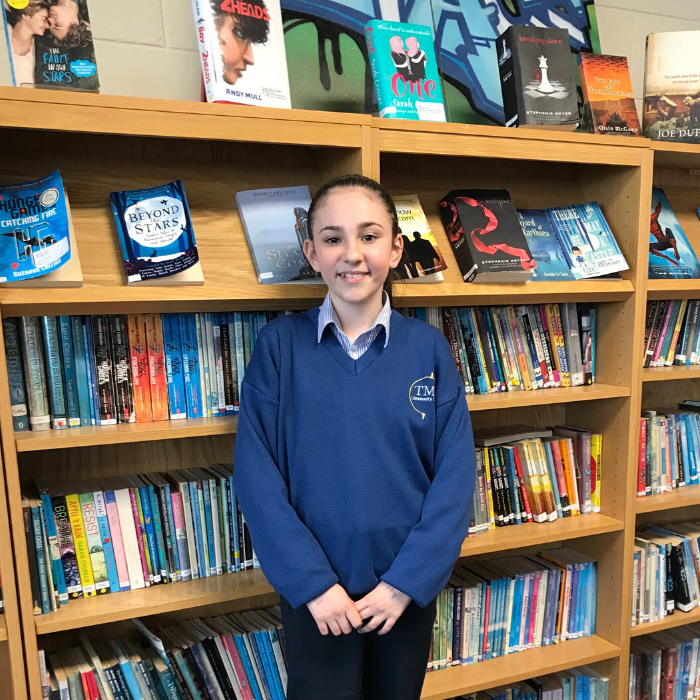 I mostly play the drums, but sometimes I switch to keyboard or bass. I chose the drums because it’s fun to play and I play it with my friends, who are in the class too. I met some of these friends when I joined the music class. The best part about playing drums is doing the fills on it – they make cool noises! I started playing bass lately & it’s a bit different to drums, because you can’t just hit anything to make noise, you have to concentrate on the strings & pick out the notes.

I started to learn music in primary school, St. Mary’s on the Hill with Gráinne, Graham & Rory in SoundOUT’s after-school programme. Then, when I moved to secondary school, I still went, but I have some new teachers now. Aida teaches me drums and I really enjoy it.

The first time I played on stage, I was very nervous – seeing all the people in the crowd, when you are used to only playing with the people in your class can give you stage-fright, but I told myself to just play along & pretend that I was still in the music room! So far I have performed in Cork School of Music as part of Gael-Force and concerts in Hollyhill Library.

When I went to Gael-Force, I had never been somewhere before where there was a huge orchestra. Normally, I play with small rock groups, but at this there was saxophones, flutes, trumpets – all sorts of things! There were loads of people there – 90 musicians. I thought I would only be playing drums, but I learned to play lots of percussion instruments on the course. I had to watch a conductor too, which was new to me – you had to look at him the whole time, because he was so far away, I couldn’t hear him! I really liked taking part & would do it again.

Music makes me happy – my family think it’s cool that I play drums – only two girls have taken up drums. It helps that our teacher, Aida, is also a girl! If you want to do drums, it’s easy enough, but you have to concentrate a lot – you have to listen to the song & find the rhythm.