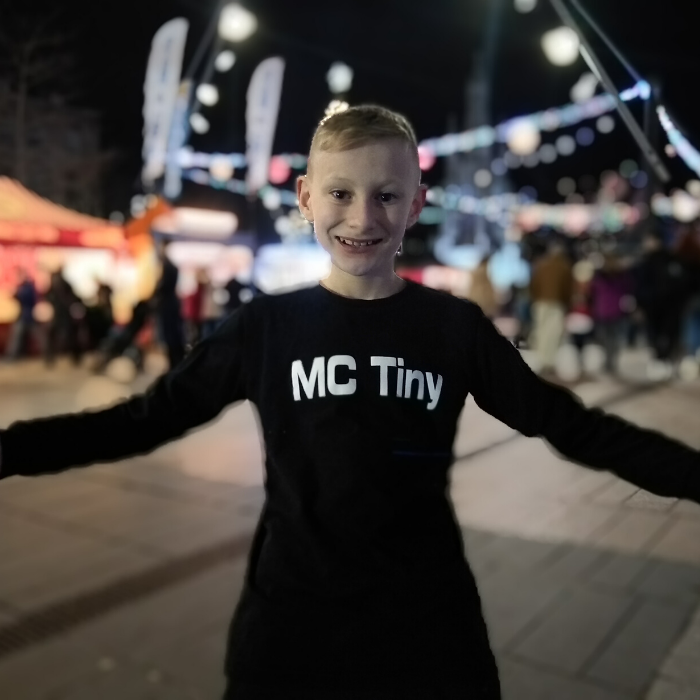 Darren Stewart, AKA ‘MC Tiny’ attends the Rap and Songwriting Project at The Kabin Studio in Knocknaheeny on Mondays and Thursdays, and Youth Work Ireland Cork (at The Hut, Gurranabraher) in partnership with GMC Beats Workshops and Music Generation Cork City on Tuesdays. He performed on the RTE Late Late Toy Show in November 2019 (see video below).

My name is Darren Stewart. I rap.

What subjects do you rap about?

It was basically a verse for Old Town Road for the Toyshow. The song is based on a horse but I did my verse about a donkey. I made it with Garry (McCarthy / GMC Beats) in the Kabin.

When did you start going to the Kabin?

After Christmas I’ll be officially in the Kabin for two years. Since I was 9.

I don’t know like. The style and the rhythm of it is very cool. I think you can get a lot of people’s attention. Like breakdancing, it’s crazy. It’s different it’s unique. It’s not like singing or opera.  It’s not like all these other categories of musical stuff. It’s different. I love to entertain.

How does rapping make you feel

Energetic. I literally made a song about how I got energy.

“I got energy, wha’ wha’,a whole life ahead of me, wha’ wha’, lots of positivity wha’ wha’, endless possibilties”. I wrote that with Garry and Cillian.

How do you come up with your raps?

I think of them and then write them down. I could be anywhere, I could just be thinking of lyrics.  I try my best to remember those lyrics ‘til I get home and write them in my copy.

Do you write them down in one journal or anywhere?

Do you prefer playing music on your own or with people?

I only do it with people so I love doing it with people. I don’t know what I’d be doing without Garry (GMC Beats) and the Kabin. I wouldn’t know how to record, to set stuff up.

Do you remember the first time you ever performed on stage?

Ya, it was at my Communion. It was up on the altar. I went up and  I rapped. I just rapped about the priest. Fr Greg.

How did your family feel when they saw you do that?

The Toy Show, Glow, The Kino

What’s the biggest difference in your life since you started rapping:

The recognition. Not being cocky, but like, I don’t know like. A lot of things have changed. The number one thing would be the recognition. Ever since The Toy Show I’ve been recognised around the place. Everyone’s been saying positive things about me.

Number two -opportunities. I was in a short film ‘Christy’ , the Toy Show, as you know, and ‘Young Offenders’.

What are your rap sessions like in the Kabin?

There would be 4-5 people on a Monday night. We have things on Monday night with a coding crew. Out of the rappers there’d be 3 or 4 of us, basically like trying to whip up a rap. Try to write something and finish it at home. On Thursdays then, not like Garry but like the older crew – they kind of mentor us. They do their own workshop in the Kabin. We have three weeks of that.

What would you say to anyone thinking about doing music?

Do it. If you put your mind to it then you can do anything.