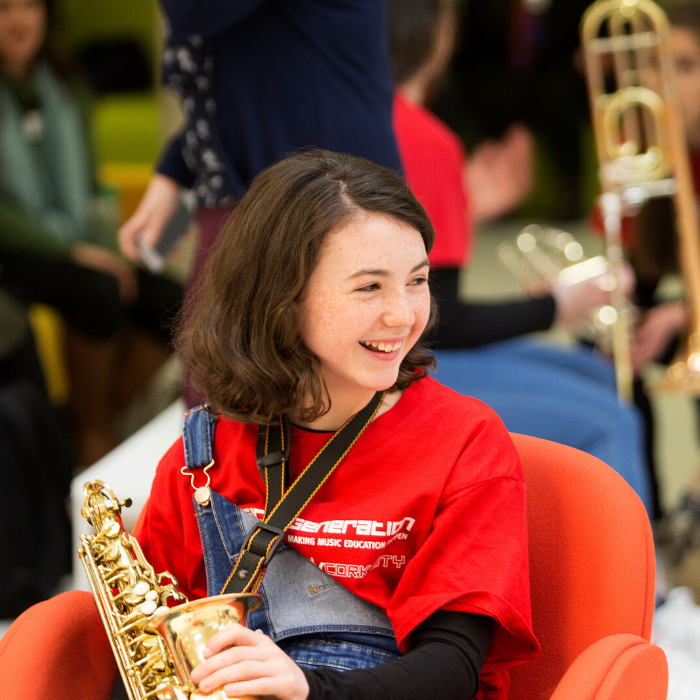 Eimear Hallahan is 13 years old and is a saxophonist with Cork Barrack Street Band’s Rebel Brass and Youth Band in partnership with Music Generation Cork City. She is a second year student in Bishopstown Community School.

“I play the alto saxophone. I love the tone of it, because it’s not very brassy, it’s more jazzy sounding. When I started, we were given a sheet when I was in fourth class in Togher Girls National School and we were asked to tick the box, whether you wanted to play clarinet or saxophone. I thought the saxophone sounded more interesting because you often see people in the movies playing it, so I thought it would be really cool.

In the Barrack Street Youth Band we play marching music and pop music and then, there’s a smaller spin off group I play in called Rebel Brass and we play jazz, pop and rock also – it’s so interesting, all the different styles.

I love playing the instrument, but not only myself, I love listening to everything else, all the other instruments around me and being part of a whole group together – it’s really fun. I really look forward to coming to rehearsals and have made so many friends through the Barrack Street Youth Band – it’s amazing.

When I was younger, I had very bad stage fright, even for school plays, it was awful. But when I started playing music, it built my confidence up every time I went on stage, because you get used to playing and everyone being there and you learn to zone yourself out a small bit from the audience and just concentrate on what you are playing.

With Rebel Brass it’s different to the big band because you’re not just playing your music and looking at your notes, it’s more interactive with the audience, you’re trying to get them to sing along or dance along. We’re up on our feet and moving a lot, so we have to learn the music off by heart.

I have enjoyed some amazing performances over the past few years. I’ve played for the President of Ireland, the royal couple, Charles and Camilla. I’ve played in Adare Manor for the Irelands Funds and at the Music Generation National Musicians Day. Every year the Barrack Street Band take part in the Jazz Festival and St.Patrick’s Day festival and I’ve been lucky to take part in many of those parades also.

At the moment, we are very busy working on music for the Jazz festival, which I’m really excited about. We have new songs to learn off and solo lines to write and learn off. You get nervous and excited when you go for a solo – you want to show that you can play this part and then, you’re nervous you might mess up, so it’s a mixture of feelings. You have to remember that a lot of the audience aren’t going to be musical, so if you make a mistake, just skip onto the next note – no one’s really going to notice. It’s important to just play on.

I am so used to playing in front of big crowds now through music, it has even helped when I play camogie and football, like when we played in Páirc Uí Caoimh – my confidence has improved so much, it didn’t bother me.

For anyone starting music I would say to them, although you might get frustrated that you can’t get the notes right at the start, you should keep on going and it will come to you – you will get there. I hope I can keep playing music for as long as I can, through school and beyond.