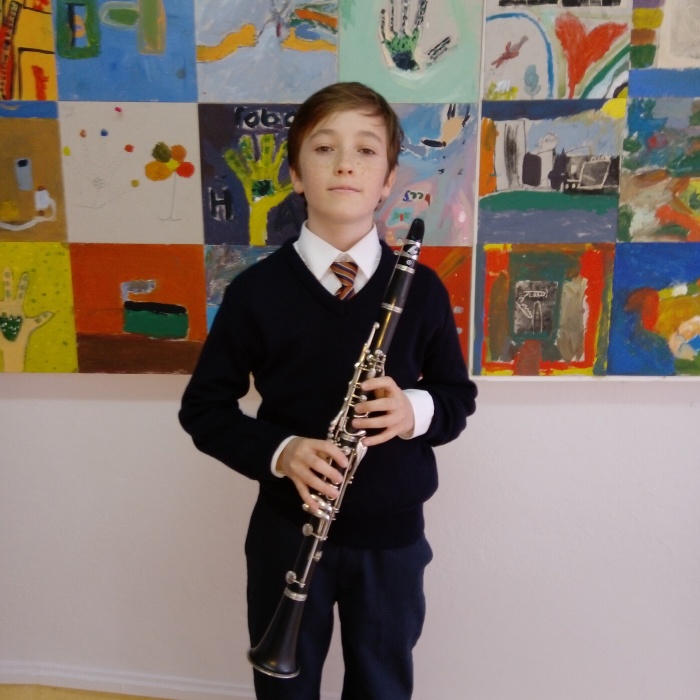 I chose the clarinet because I thought it’d be a fun instrument to play and that I’d like to give it a go. I had never heard anyone play it before but I’ve heard a few now. At school (St. Maries of the Isle N.S.), we learn in groups of 3 with our clarinet tutor Gemma. I’ve been playing for almost a year.

Playing in a group is good because if you mess up, the others could help you. But if you were in a solo and you messed up, a lot of people could hear you.

Its good that the school provides an instrument. Otherwise you’d have to pay for them and it’s pretty expensive, and you wouldn’t know if you’d keep doing it cos you might decide to do something else, like other than music, and then you had just spent a lot of money on an instrument that you might not play.

Rap is my favourite type of music. I like Eminem and Stormzy, and I like old raps from the 90s.  Youtube is where I listen to music most. If you watch rap a lot, it goes up more on your recommendations. So usually I find new music randomly that way, and sometimes its good, sometimes its not.

My sister used to play music too, and my dad is good at the guitar. My family recognise some of the songs I play, and some songs they wouldn’t. They usually want me to play the long pieces.

I like maths, and with the clarinet, you have to count how many beats there are in a bar, and things like that, so it’s a nice thing to do.

Music is a good way of expressing yourself. And you can change your mood through it. If you’re sad, and you listen to a nice song, you kind of cheer up and feel better, and it’s just kind of cool getting a song done overall. it feels good to play for people, when they’re enjoying it, and they’re clapping for you.

The band (Barrack Street Training Band) is good. I enjoy doing it. Its nice to see all the people, and when you play altogether and you get the perfect song done.