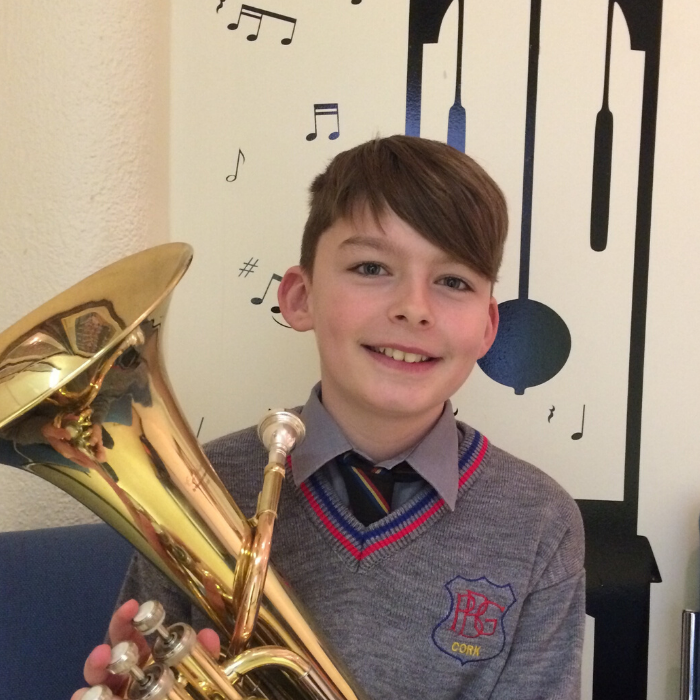 Sean O'Callaghan (age 11) recently received the 'Person of the Year' award for playing baritone in the Barrack Street Junior band before moving up to the Barrack Street Youth band. Next month he will be taking part in Brass Off! a large scale three-day musical event for young brass and wind players as part of Music Generation Cork City.

I have been playing the baritone for around three years now. I really like low sounding instruments. The reason I wanted to learn the baritone in the first place was for that; I love the deep sound it makes, it’s really nice and soothing.

We have lessons every Thursday. Shauna is our teacher and she has been teaching me from the very beginning. I had never touched an instrument before and so at the start, I found it very difficult to learn. The hardest part is in the breathing as you need to breathe at the right time to play all the correct notes, but after a while I got into it, and thought it was grand.

When I get to play the baritone with the rest of my friends, that’s what I love the most. You can hear loads of different types of instruments and it all sounds so good together. In the low brass section where I am, there is baritone, trombone and the tuber. The high section consists of cornets and trumpet – these are played an octave higher than the low brass section. We also have people playing percussion.

In a couple of weeks time, there’s a big event called Brass Off taking place in Cork and a load of other musicians are coming over from Carlow and Mayo. I am really looking forward to this. It will be great to meet new people and play as part of a really large ensemble.